The subject of the Tarot is too deep a matter for my words, volume upon volume have been written disclosing and discussing this pictorial book of esoteric teachings and symbolism. I began my exploration of this great body of images by turning to the deck, The Universal Ryder Waite (a reworking of what is referred to as the first modern Tarot deck, published in 1910). Once here, I found myself curious about the Angel’s that I saw recurring in some of the cards of the Major Arcana, and this is where my process began. With my mind wrapping itself though metaphysical realms, recognisizing these images to be the occupants of the “collective unconscious”, my hands began to take their forms. Interpreting the forms of these images anew; finding fiber for form, embroidering a line that threads it’s way through the layers of mystery, enacting I hope, some of the power inherent in the cards. 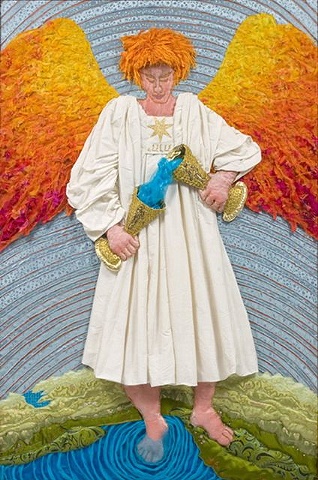